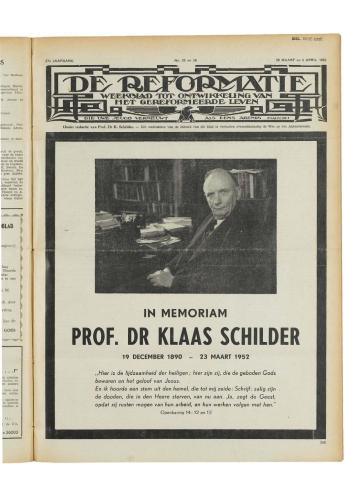 Dr. Schilder visited here in 1938 on invitation of the Christian Reformed church and returned in 1947 on invitation of the Protestant Reformed church. He was head of the departm-ent of dogmatics of the Theological School of the Reformed Churches, according to Mr. Hoeksema. He was a leader in the movement that established liberated churches in The Netherlands in 1944. A liaison was maintained between the group in The Netherlands and the Protestant Reformed churches in America, according to Mr. Hoeksema.

Most noted of the books written by Dr. Schilder was a three-volume work entitled „Christ in His Sufferings, " which was translated into the English language and published here. At the time of his death he was at work on an exhaustive treatise on, the. Heidelberg catechism.

He had been imprisoned for a time by the Nazis in World war II, was threatened with arrest a second time and went underground.