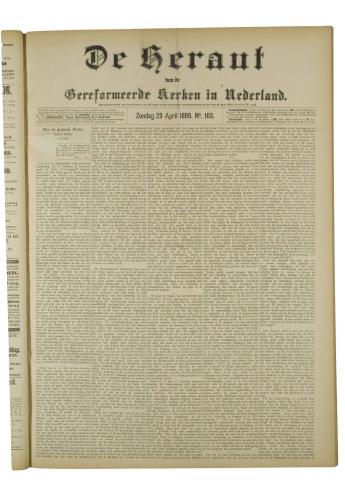 Mr. Pandian of Madras in Europe.

As I am now bringing to a close my lecturing-tour in Europe, I beg to convey my heartfelt thanks to all well-wishers in Europe! The financial result of my lectures has been: in England £ 110.18.-, in GeiTnany 4400 Mark, in Sweden 2470 Kron. 40, in Holland 2100 Guilder; ; , including the sale of my manuscripts, photo's ami books, for which I am very thankful I came to England in the year 1893 under the distinguished patronage of His Highness the Rajah of Ramnad and delivered my lectures in different towns of Great Britain on the subject of the Pariahs.

In order to help me in this work a committee was formed in Eondon, which regulated the whole matter for me. I did not receive any money from the people. But the committee arranged everything and I enjoyed the hospitality of the English people everywhere.

When I left Madras in 1893, a farewell-address, signed by many leading gentlemen of the City of Madras was given to me on the 8th May 1893, in which several things about my work in India were mentioned.

At the close of my tour in England a farewell-address was presented to me in the Exeter Hall, London, on the 27th June 1894, signed by Sir Mark Stewart M. P.; as a mark of sympathy to me, my friends in England gave me a few presents for my personal use; among other things, there was also a printing-press which I kept for about twelve months, after my return to India. But the keeping of this pressestablishment was very great and troublesome, and so I closed this press and sold it by public auction for 900 Rupees.

On my arrival in India I opened three Pariah schools and I had six agents all of which were paid by the committee from England by sending the payment once in three months, and this continued for 12 months.

While I was having these agents I got their signature for the payment they received from me, and all other accounts were kept in a book which I have got in hand.

Unfortunately most of the committee members in England were Baptists, and they did not find pleasure in supporting a separate mission rather than their own Baptist body's work and so they discontinued their support, which brought great trouble and difficulties to my work in India. I had to close the schools and had to ask the agents to look for some other work. Personally I had to encounter many difficulties. However I took courage and I thought of paying another visit to Europe for the purpose of finding some help and syinpathy in order to resume my work among my less favoured countrymen, whose cause I have been pleading for the last seven years in season and out of season, notwithstanding the world of opposition from every quarter.

I took leave from my dear wife and children on the 20th May 1897 and arrived in London in the month of June. Having attended to the publication of my books, I started lecturing in England on the „Village life in India" and other subjects of general interest. I was introduced to the public by venerable William Sinclair, Archdeacon of fiondon. I published a balance-sheet on the 30th December 1897. But the financial result was not very great. In the year 1898, I lectured for three months in different other towns in England and while I was speaking in Salisbury conference I was introduced to a lady called Miss von Welling of Blankenburg, Germany, by Dr. Baedeker and said lady arranged for my visits to Germany by asking her friends to invite me there. In the month of March 1898 I went to Great Malouw to see Sir Henry Aclaud of Oxford who was staying with his son for a time and I told all my affairs to this noblehearted gentleman. He took a great interest in me and introduced me to some of his friends and at last I found an opportunity to visit the Lord Bishop of London on the 28th of March; his lordschip expressed his interest in my book „Indian Village Folks" and promised to speak about me to the Right hon. Lord George Hamilton, the secretary of State. On the 29th of March 1 went to Gennany and visited Dusseldorf, Berlin, Hamburg and other towns and from there I was invited by engeneer Berg to Sweden, and from Sweden I came back to Germany and from Germany I went to Holland.

All my lectures were illustrated either by magic lantern views or by Indian curiosities and the people were asked to pay an entrance-fee at the door and an opportunity was given to the public to show their practical sympathy if they choose at the close of the meetings. The interest that was created by my lectures and the information I gave to the public is not in my province to speak about.

While I was working in connection with the Wesleyan Mission in the town called Needamankalm, Tanjore District, South India 1887 a false charge was brought against me touching my honour, (this is a common thing in that unfortunate country) which irritated me very much and as I was very young and passionate I broke off from the Wesleyan body by sending ray resignation on the 8th of May 1887. Since this time I was living in Madras and was in close touch with Baptist people there. I have letters and other writings from the Baptist leaders in Madras with whom I was connected up to the end of 1897. These writings will show sufficiently that they have had confidence and respect for me. But, alas! now in tlie year 1898 I left the Baptists and some of them became uncharitable towards me.

The Madras missionaries have passed a rule among themselves not to help any Indian Christian who stands outside of their respective mission-work, and so I do not get that sympathy and help that i should find from representatives of this Christian work in Madras. There are some people persecuting me, and have wronged me and have done injustice to me. But this is no wonder. Any man who steps out of the ordinary rank of life and proceeds on the part of his duty to his fellowmen, according to the light he possesses, will receive unkind treatment from the world. It was so and it will be so in the world, and the history speaks for itself If we ask the Pharisees who lived in the time of Christ to give an opinion about him, they say that „we know that this man is a sinner." How much more a man like myself with imperfections and shortcomings, to be treated unkindly by the people of the world in our time and generation. I feel, I may add that my pre-' sent religious view is not that what it was some years ago, and I now see new light and rejoice to walk in the path of that light.

In the interest of charity and justice, I beg to invite all true and noble-minded people, to get a copy of my book entitled „The slaves of the soil" which will throw a sufficient light on my life and work.

First reactions in the Dutch national press to the 1891 Papal Encyclical Rerum Novarum 1 .

All over the worldi e/um Novarum made a significant impact, but in some ways the impact in the Netherlands was unusual and more impressive than elsewhere. Serious and practical discussion amongst...